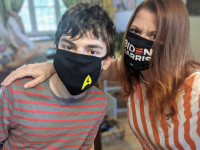 Jason randomly came across this video the other night, and after a good laugh at his six-year-old self, Noah asked us what in the world we were thinking, letting a six-year-old watch Wrath of Khan. It's so not age appropriate, Mom and Dad! Jesus Christ. v I asked him if he'd let me record an updated Wrath of Khan According to a 15 Year Old (Who Has the Entire Movie Memorized and Regularly Regales His Family With Dramatic Reenactments) version, but his only response was a withering look of Pure Teen Pity that I would even suggest something so unbelievably lame. Nobody blogs anymore, he reminds me on a fairly regular basis. I know, I know, I tell him. I don't even really blog anymore. You had a good run, he says. He doesn't mind if I blog about him -- he puts this blog in the same category as my minivan, or my affinity for Jeopardy! reruns and Taylor Swift. Just another Uncool Mom Thing That Moms Do. Moms! You gotta love 'em! So he's not the reason I haven't been writing. Nor is there any sort of family drama or offline intrigue or work kerfluffles or anything like... Read more →

Posted at 03:26 PM in ANXIETYYYYY, Noah, when the world turned upside down | Permalink | Comments (49)