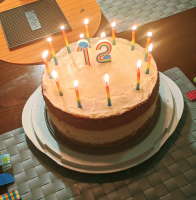 I'm technically a day late with Ezra's birthday post -- oh, mourn the plight of the poor middle child -- but in my defense I spent half the day working, half the day homeschooling, half the day cleaning the house, half the day playing tech support for Chromebooks/Google Meet/Canvas/Lexia/DreamBox/MackinVIA/Wixie/GAAAAAAH, and at least half the day baking his birthday cake and re-making a rainbow friendship bracelet for him to replace the first rainbow friendship bracelet I made that one of the cats ran off with. I know that's too many halves. Everything about life right now has too many halves. But you can never have too many rainbows. Or cheesecakes topped with carrot cakes. Or toddler flashback videos, provided you completely ignore the timestamp, which says this is from NINE YEARS AGO, which is a lie, I filmed this last week. It was a tough choice between this one and the cupcake gorge-fest one. Yesterday we had a bit of a repeat performance, only it was an entire bowl of mashed sweet potatoes and some salmon, because Ezra is a Refined Young Gentleman now. And yes, that is the same Taggies ball he had in the video above, and the same... Read more →