But you can never have too many rainbows. Or cheesecakes topped with carrot cakes. 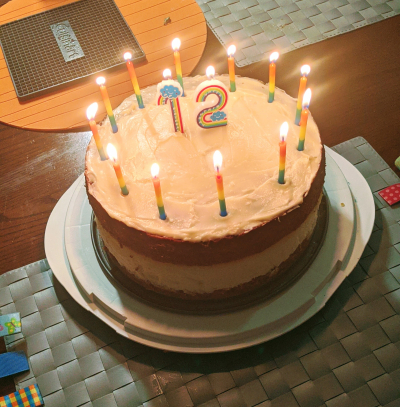 Or toddler flashback videos, provided you completely ignore the timestamp, which says this is from NINE YEARS AGO, which is a lie, I filmed this last week.

It was a tough choice between this one and the cupcake gorge-fest one.  Yesterday we had a bit of a repeat performance, only it was an entire bowl of mashed sweet potatoes and some salmon, because Ezra is a Refined Young Gentleman now. 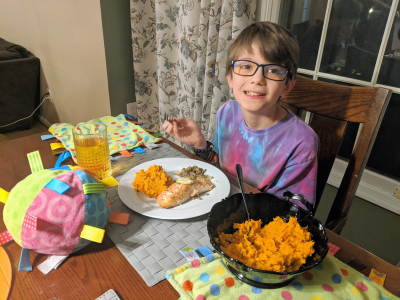 And yes, that is the same Taggies ball he had in the video above, and the same Taggies blankets he's had since he was a baby.* Ike was in charge of setting the table and created a display of various comforting objects and artifacts to jazz up Ezra's seat. Hobbes and Bluen were there as well, of course.

Well, technically he's only had the ONE blanket he's since he was a baby, and the other one since he found the duplicate blanket I bought off eBay a couple years later as a backup in case we lost the first one. Not long after that he left the ball behind in a hotel, but it was kindly and graciously mailed back to us.

I considered trying to find a backup ball, but realized we were quickly spinning into madness. Three super-important lovies/sleep crutches to constantly keep track of is my absolute top-level limit. As are three children.

But like I said before, you can never have too many rainbows. 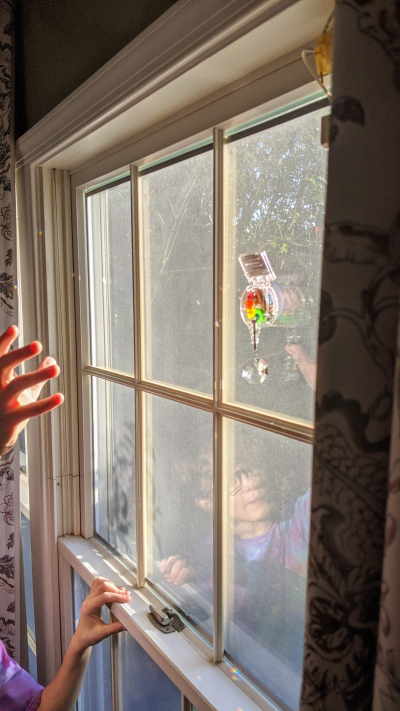 (That's a solar-powered rainbow maker, in case you know anyone who could use a room filled with rainbows right about now, i.e. yourself and everyone you know.)

Happy birthday, Mighty Zah Ezra. You are -- and have ALWAYS been -- our walking ray of sunshine, who can fill a room with rainbows, just by being you.

Happy birthday Ezra! He is such an amazing person, and Ike is a sweetheart for decorating the table!

I love everything about this. Happy birthday, Ezra!

PS - I may have to check out that Amazon link. My own rainbow-loving kid is turning 12 in a couple of weeks!

Happy Birthday to a great kid!

There is this amazing prism window film that is all over TikTok that fills the entire room with prismy rainbows!

I always heard this, but didn’t understand. It just goes by so fast! Happy Birthday, Ezra!! what an amazing life we get to lead with our kids, filled with thousands of little miracles every day.

OMG too many halves, that is exactly my life right now!

How is your life Meet/Canvas/Lexia/DreamBox/MackinVIA/Wixie/GAAAAAAH when my life is Zoom/Seesaw/Invision/Starfall/BookFlix/PebbleGo/Sholastic/GAAAAAAH? (That is for ONE kindergartner.) How many of these platforms are out there?! Why are there so many hastily launched, buggy remote learning apps?

Why do your kids keep having to get older?! Ezra is supposed to be about 3 so that Ike is 1. And that means my kids are the same age. 😀

I realize this impossible. But seriously, why do the have to get older!!!!

Happy Birthday to my unabashedly most favoritest of your children and my future husband! And for the new readers, I am very close to receiving Social Security (unless it goes away, of course) so I am truly joking about Ezra being my future husband, so don't sic the law on me.
Love that you've kept his lovies! Love that he still loves and needs them.
Hope twelve is a fabulous year for him.

Happy Birthday Ezra, and Happy Ezra’s Birthday to YOU, Amy, all the happiness and rainbows to you!!!

May all your birthdays be at least as happy as this one, Zah! Of all the boys in the world, I think I like you best. Your mom, dad and other brothers are pretty good too.

Ezra gives me such delight. Best wished to you Oh Mighty One!

I am so moved by ike's decoration of his big brother's place. Such thoughtfulness, care, and love.