In Which She Writes Promises Her Blog Can't Cash

Well! That was a very mean thing I did there, promising everyone all sorts of updates and mayhem, and then not writing a single blessed thing. That's some big Caroline Calloway energy, pre-order my blog post, get a free mason jar, etc.

In reality, I hit the Publish button and then ran away in terror, worried that I’d get like, five whole comments, at least two of which would be bots telling me how much money their bot cousin’s bot sister makes selling pEn!s Enl@rgMent pi11s 0n FaCeboOk dOT Coom.

I was both surprised and deeply touched by the actual response, and maybe teared up a little, and y’all know how much I hate that sort of thing, and then Typepad was down, because who the fuck still uses Typepad, and then work got super busy and Putin started WWIII and a million people died of COVID and the Supreme Court did that thing, and also I’ve also been really into houseplants lately and it’s a surprisingly time-consuming hobby? Who knew? Anyway, I’m sorry, here’s a picture of my cat: 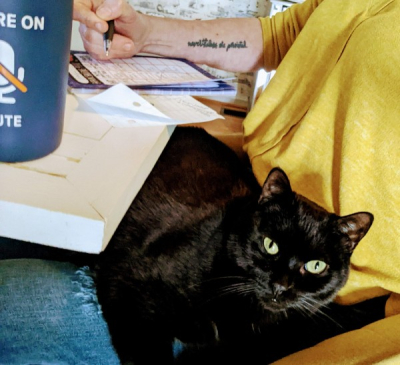 And here's a picture of my other cat: 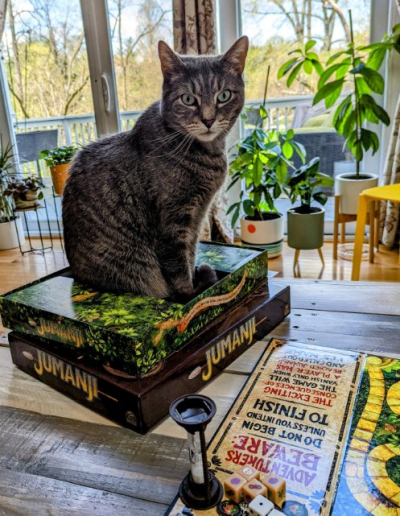 Here's a photo of a void, a void who is not doing anything naughty because she is a void, and your simple human eyeballs cannot process her infinite voidness: 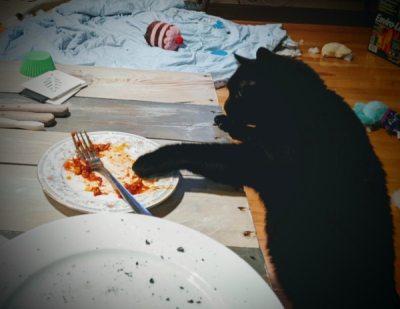 More of a dog person? I got those too. They are good doggos who are never naughty. 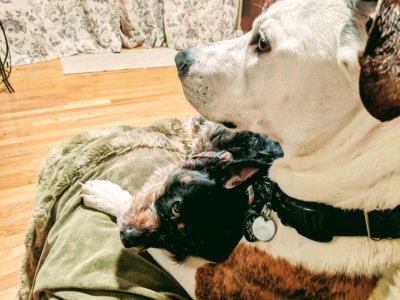 (Poppy is givin' me the WHY U LYIN side-eye in that one.) 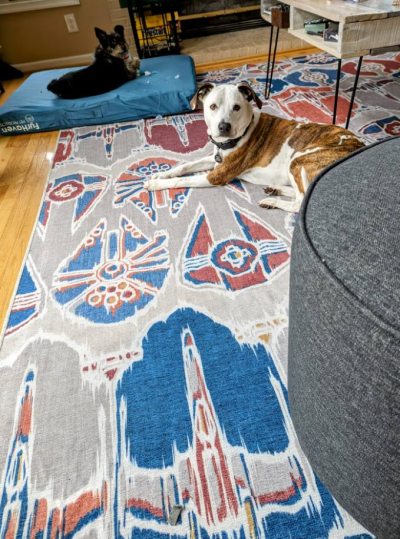 (Okay, and that one is more about the rug than the dogs.)

And here's a picture of some lanky randos: 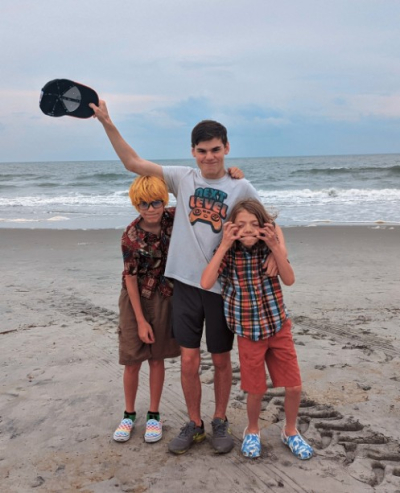 And that’s it. That’s the post, for now. At least I didn’t make you look at pictures of my houseplants.

(And I would never do that, because y'all are lovely but y'all are still The Internet, and I don't need The Internet coming at me like ZOMG don't you know that kind of houseplant will KILL UR PETS, and I'll be all, yeah yeah I know I'm not an idiot, but I swear none of them ever eat/chew/bite the houseplants, I promise, and you'll be all, surrrrrrre they don't, that's exactly what an idiot would say, you NEGLIGENT PET-KILLING MONSTER.)

(In case you've been wondering if the impulse to have imaginary arguments with The Internet inside your brain ever goes away, the answer is apparently no, it does not.)

I can’t believe how big your boys are….been reading since Noah was a newborn!

Thank you for writing on your cave wall. I have been here since before Noah was born, and well, I've missed you. Also, as a human with a void cat, they are impossible to photograph!

Always happy to see an update from you! Enjoy your weekend!

Yay! I was just thinking about you randomly the other day and wondering how you are. It’s good to hear from you. Also, is Jason still a baking mad man?

I can’t believe you have a RUG. That RUG will KILL your precious pets.

There, INTERNETED from an unexpected direction. Can we see houseplants now? 😆

Great update! I've been following your adventures since Noah was born. Your boys have grown!

I meant to comment before but didn't. I love blogs and I love your blog and over the years I've started feeling like you are an old friend even though I don't think we have ever interacted. In that not creepy "I've read your blog for over a decade" sort of way. So I'm glad you're still posting, however rarely, and I am glad that all of your animals and family members are doing well!

I mean, the second picture is clearly of houseplants and just happens to have a cat in front.

FTR, I am not a fan of the deodorant wars. Just saying.

Yay I love any kind of post! That rug is amazing...looks sophisticated and interior-design-y and then you realize it's Star Wars!

It's my pets that keep killing the houseplants...

Holy cow, who are those three young men and how did they get so tall?

Seriously, though. Keeping kids, pets, and houseplants alive is impressive enough these days. Don't sweat it about the blog posts.

OMG how did the lanky people get so lanky?

Whew been checking non stop and here you are
That rug is the perfect Fathers Day gift, my sons will freak out when I show them-thank you!!!!
I also am oddly drawn to the idea of seeing your plants- do you name them? just me?

OMG, you have no idea the joy in my heart to get an update. The last 2 years have been hard! Glad you are doing well!

LOVE the void cat. How did I not know those were a thing? Now I want one. Love the update - thanks for saying hi!!!

WAIT. What? I missed a blog post?!? This is why I am still angry that Google Reader shut its damn doors in 2013. WHAT IF SOMEONE ACTUALLY POSTS A BLOG?!?

I mean… I have a life. That’s why I missed it. Definitely not trying to still live like it’s 2010. Nobigdeal.

Giant kids, pets on the verge of death from
killer plants and a great rug. Perfect content.

I see how you snuck the houseplants in. I SEE YOU! (Impressive!)

Love seeing the kittehs and doggos and those humongous boyz that you created! Don't be a stranger!

We *need* more pics on the kids and an update on them! They can't just go and GROW like that!! Miss hearing about your kids and you and Jason!
We're here for it!

Look at your boys. Wow. Please tell them your Internet frens wish them well.

Always happy to read an update for you, whatever it is! Life can feel hard, especially lately, and I'm glad to hear you're well and passing the time with a fun new hobby to boot!

Those are such pretty houseplants. I am a gardener and if you think people freak out about pets and houseplants you should hear kids and gardens. Yes, I know (any one of a hundred plants) is poisonous. They are planted outside the area where kids can play unsupervised *and* my children long ago learned the terms edible and inedible and the need to know that something is edible before eating it. And, no, my dogs don't eat my plants either.

For a hot second I passed by the reader entry for your post (Feedly.com). Thankfully I did a double take and loved every minute of reading and looking at pictures and reading all the comments. It’s always lovely to hear from you and get news of your family and pets (and who can forget ‘tire watch’ ; ). Thank you.

A teacher called my daughter "lengthy" (same age as Ike) and that's her new nickname now. Glad you're still around. Us non-bots are desperate for connection and community or some shit like that.

I mean, it's been 2+ long years of a pandemic and whole crap-ton of other insanity... I would be pretty stoked to look at pics of your houseplants.

Love all the animal and lanky kid pics! Amazing how grown up they all are. <3 (old-school heart! whoa!)

Just super glad to see your dogs. cats AND the occasional kid ... but my GAWD I agree with Jill you adorable RUG is what's going to kill everyone ... now, plants!!

Happy to see you all are making it through all this mess. Life is hard and frustrating, so thank goodness for cats, dogs, and those days when the kids smile. (These pre-teen/teen years are no joke.) My blog has dustbunnies and spiderwebs all over it. It just got hard once the kids were old enough to make it not feel ok to share their stories, even when told as my stories. And face it, right now, parenting them IS most of my story. But I'm out here watching and reading and enjoying everyone else's posts and photos like crazy! It reminds me I'm not alone out here!

THANK YOU. Things not going well in many areas, as you noted, hearing from you is a BIG positive. Need more BIG POSITIVES please. Am certain those are ringer children as yours cannot already be of those ages...... But they are so gloriously EXACTLY what I pictured your sons becoming .... TOTALLY GREAT and TOTALLY Their Own Selves!
Thank you for joy and hope and encouragement and ........ hope.

I have a house full of both toxic plants and animals...

Thank you for giving us an update on life - I missed the window to comment on your previous, but I was so glad to see that you'd written anything.

Love the rug, the dogs and the giant kids you have now! :) Post whatever and whenever is right for you, it's your blog. I also love houseplants so feel free to share those, I'd read pretty much anything you want to write about.

Made my night to see and update from you! Glad you are doing well.