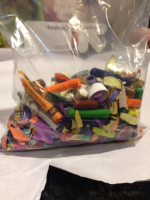 Over the past week, we have attended three different parent/teacher conferences. Which I guess makes sense, given that we have three different children, but still. What a damn timesuck that ends up being. Something to consider for any ongoing family planning purposes, you guys. . All three conferences were fairly uneventful. Ike enjoys learning about animals and seems very comfortable "exploring the classroom space." (Translation: wandering around like a hopped-up ping-pong ball.) He is going through a "big vocabulary development phase." (Translation: He never ever shuts up.) Occasionally he can be quite "independent" (stubborn, difficult, made of NO, the perfect embodiment of every 3 year old ever) but is easily "redirected" (look Ike, it's something shiiiiiny!). He is not a big fan of the Montessori "Practical Life" activities. (Translation: Table dusting? Floor mopping? Silver polishing? WTF decade do you people think this is? Child labor laws and Dyson vaccuums. Look 'em up, assholes.) Noah enjoys...oh, throws up hands, Noah enjoys school and has the best teacher in the universe who responds to his occasional rigidity with all the calming flexibility of a gentle, graceful birch tree, who absolutely adores him and says things like, "oh, my heart!" when describing his... Read more → 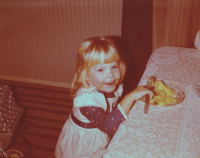 (In Which I Strive To Not Talk About Sad Things During Another Post For The American Cancer Society) I was looking through stacks of old photos in hopes of finding some inspiration for this entry, something that would FINALLY maybe focus more on the "birthdays" part of ACS' More Birthdays campaign and less about, you know, the "cancer" thing. I'm not sure if I found inspiration, exactly, but I definitely found a theme. And that theme would be: Cake, Pinafores and Unfortunate Bangs. Oh, I'm kidding. But not about the cake part. Aaaaaand maybe not so much about the bangs thing, either. Sometimes I feel guilty about how few photos I manage to ever actually print out. About 99% of my children's childhoods remain solidly in virtual form only (albeit with a robust and slightly paranoid web of backups going on under the hood). There's something nice about sifting through yellowed stacks of photos, never knowing what awkward, poorly lit memory you'll hit on next. Then again: No timestamps. Perhaps these photos were once labeled in an album, but are now floating loose and out of order, so I have no idea how old I am in the above photo.... Read more →

IN WHICH I COMPLETELY DORK OUT FOR CANCER AWARENESS

Wait! Don't run! This post is not another bummeriffic downer of a weepfest or whatever. I'm totes back to embarrassing myself for fun! Long- and semi-longtime readers now that I have been partnered with the American Cancer Society's More Birthdays campaign for quite awhile now. At this point, they pretty much say JUMP and I say HOW HIGH AND WOULD IT HELP IF I HIT MY HEAD ON SOMETHING ON THE WAY UP? This time they asked me to sing. Oh my God. You guys. Yes, Noah is covering his ears the whole time. Yes, Ezra only knows the "YOU TOO, YOU TOO, YOU TOO" part. Yes, poor Baby Ike is flopping around helplessly like a loaf of Wonderbread because I clearly have never held an infant before in my life. (This was Take One. Things devolved even further during Take Two, believe me.) And yes, I am singing and five weeks postpartum and also the whole right side of my shirt is soaking wet because I got trapped outside in a torrential downpour about five minutes before filming this because I am no better at holding umbrellas than I am with babies. Also: My hair. I know. I KNOW... Read more → 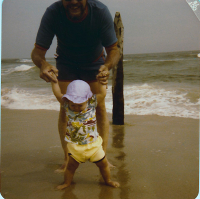 This is the last post in the More Birthdays campaign, sponsored by the American Cancer Society. I imagine it's pretty obvious by now that I didn't really have a plan or theme for this "series," but just sat down each time and started typing and hoped that I'd stumble upon a point or insight somewhere along the way. Honestly, most of the time I just crossed my fingers that I wouldn't get an ominous phone call in between the draft stage and the publish button. I guess, as usual, the best place to start is with the dry, basic facts: The doctors told my dad it was time to stop the chemotherapy. He opted...not to take that advice, and got his oncologist to concede that as long as he kept his blood count numbers just above a bargain-basement level, he could probably continue with chemo. He heard: There's still hope. The cancer has spread to his lymph nodes. But not as much as the doctors thought. His spleen is enlarged. But not as enlarged as it could be. Again, he heard: Hope. After multiple cancellations, at least one infection, some antibiotics and I don't even know how many transfusions, he's... Read more →

The American Cancer Society asked me to write an additional post for the More Birthdays campaign. (I was supposed to write one more, next month, and that was it.) I suppose I can assume this means they've been happy with the response so far and you guys have been clicking over and retweeting and like-buttoning or whatever the hell it is you youngsters do these days with your Internets and smartyphones and...and... What was I talking about? I got distracted by some deep thoughts about prunes. Oh! Right. Another post for ACS. Another look at a topic that should inspire at least a dozen entries from me on any given day, eleven of which are all but guaranteed to make a significant portion of the Internet cry. Or at least, lie about crying in my comments section. Don't think I don't know you do that. (And don't think that I don't love you for it.) But oh. I'm tired of it. It hurts like a bruise, and some days just thinking about it feels the same a swift kick from pointy shoes. My dad...well. Things are about the same. He still believes he'll be able to continue chemo, somehow. And... Read more →

And then, in the middle of everything, I looked at the calendar and realized it was time for another post for the American Cancer Society sponsored More Birthdays campaign. Yes, more death and cancer talk. THAT'S THE TICKET. LET THE GOOD TIMES BLOG. I didn't even get to actually attend Jason's grandmother's memorial service on Sunday -- after being led to believe by his parents that the whole thing was just a casual reception/family get-together and that we should absolutely bring Noah and Ezra, we arrived at the nursing home's auditorium to...a quiet, somber church service. With hymns and prayers and a sermon and everything. We were the only ones who brought children. Oh, and this was already taking place during Ezra's nap time, too. So he was in reeeeeally great shape, and I'd promised them cookies and chocolate milk, but the food hadn't been delivered yet, and SERIOUSLY, IT WAS SO QUIET AND REVERENT AND CHURCH-Y. And then we showed up with a pack of wild Unitarian hyenas, or something. So. We'll...be in the back row, I guess. But even in the back row, the boys' cries of DO YOU HAVE CANDY IN YOUR BAG, MOMMY? CANDY? CAN I... Read more →

Last week, the oncologist told my dad that it was officially time to stop the chemo. It still wasn't working. There was no reason to believe it would ever start working, now that he'd somehow soldiered on through three months of it, only to have the leukemia progress virtually unimpeded in the meantime. My dad said, "Okay, now what do we try?" Tomorrow, "we" try a different chemo with a different drug. A drug my mom won't even tell me the name of, because she doesn't want me to Google it. Today, I had an entirely different post saved in draft that I planned to publish. Today was always supposed to my the next entry in the series for the American Cancer Society More Birthdays campaign, and last week I decided to take a crack at getting that post written and out of the way ahead of time. "Last week," as in: "probably the day before that oncologist appointment, yeah, good timing, self." It wasn't a bad draft, or poorly timed or completely irrelevant -- I mean, when you're writing about your father dying of cancer, there are only so many shades of emotion or variations on not-exactly-good-news you can... Read more →

As much as I would LOVE to write an incredibly detailed post about our weekend of non-stop stomach-flu illness (and as much as I'm sure y'all would LOVE to read about it), the fact is I previously committed today's posting spot to the American Cancer Society. They asked me to participate, once again, in their More Birthdays campaign, and contribute a monthly-ish post to help raise awareness of their research and programs and website. Today's post, according to my official editorial calendar (translation: an email from a few weeks ago that I have miraculously NOT LOST) is supposed to be an introductory sort of thing -- explaining why I chose to participate in the campaign in the first place. Which, to put it eloquently, would be something along the lines of: Well, DU-U-UH. Last night, Jason's phone rang at exactly 2:32 a.m. I was deep in the middle of a stress dream involving being late for high school (after being awkwardly felt up and then promptly dumped by Michael Cera, that JERK) when I heard it ringing. It stopped soon after I fully woke up, but of course I lay there staring at the ceiling for awhile, panicking. Was that... Read more →