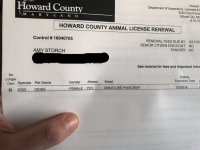 Further evidence that Marrch is the worrrrrst*: A friendly reminder that it's time to renew Ceiba's animal license! Right on the one-year anniversary of her wild adventure of wandering two whole lawns over, then getting herself carted to the shelter, where I first paid for the license (and a fine for not having the license in the first place whooooops), and also got the news that oh yeah ur dog is peeing blood now, might wanna get that checked out. At least she lived out her final couple weeks as a fully legal dog, although perhaps under the new administration the citation for being off leash on her record would qualify her for dog criminal deportation. Either way, love my option here for explaining why I'm not paying for this anymore: THAT'S ONE WAY OF PUTTING IT I GUESS. I still vividly remember the panicked, clammy, heartsick feeling I had that entire night, and the CRUSHING GUILT that it was all our fault -- the gate/no collar/no microchip/the letting-the-dog-out-and-just-plain-not-noticing-she-wasn't-let-back-in. My brain kept circling back to the possibility of "that's it, this is it, she's gone and something terrible is going to happen and you'll never know what happened, but ohhhhhh... Read more → 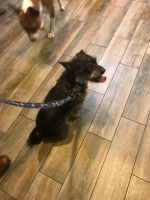 We're coming up on the year anniversary of The Worst Week Ever, when we lost both Ceiba and Max in hideous, rapid-fire succession. So it's been interesting that over the past couple weeks I've fielded an unusually high number of emails with questions about the new pets. Specifically, how/when/why-type questions about our decision(s) to adopt them, from readers who are either dealing with a recent loss (or double whammy like ours, I'm so sorry Jen, 21017 can suck it), or are considering adopting themselves and want some honest real-talk about the process. And while answering these emails, I've probably written like, enough words to fill four blog posts about it. So...let's re-purpose some shit! FAPQ #1: How did you know you were ready to adopt a new dog? I dunno. I kind of didn't? The boys brought up the possibility of a new dog almost immediately after we broke the news about Ceiba's cancer to them. Jason was like, "That's a good idea." I was like, "Slow your damn rolls, you monsters, she's not even dead yet." And then I spent the next few days mourning deeply for that dog, the one that wasn't even dead yet. The appointment to... Read more → 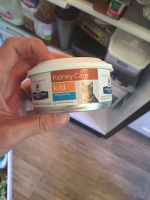 I found this in the back of the refrigerator today. Okay, that's kind of a fib. I've known it's been there for awhile. Probably since the day after Max died. I just...couldn't deal with it, so it slowly got pushed further and further back. Out of sight, out of mind. After he was gone, I hastily dumped out the litter and scrubbed the evidence of his final decline out of the carpets in our bedroom. I boxed up his unopened food for the shelter and added Puppy and a tuft of his fur to the memory box we'd prepared for Ceiba. But this stupid, half-empty can of food? Hey man, it's a process. Don't rush me. Yesterday I created two separate GoFundMe campaigns to raise a little money for the two animal rescues we adopted from -- Tara's House and Kitties & Pitties. A couple Facebook friends had suggested something like that after Ceiba died, or asked where I'd like donations be made in her name. I remember thinking that was a good idea, but much like the can of cat food, couldn't really deal with actually doing anything about it at the time. The Maximillian Thunderdome Memorial Fund The... Read more →

"And How Are the Boys Doing?"

I've been asked that question a lot lately. Overall, I think the boys are coping with the double-whammy loss pretty well, albeit each in their own way, at their own pace. Noah -- who remembers the loss of his grandfather the most vividly -- is probably doing the "best," although that's really not the right word. He's the most pragmatic and accepting, it's pretty matter-of-fact to him now. As I already wrote when we broke the news about Ceiba, he very literally experienced every distinct stage of grief right there at the dinner table, one right after the other. After that, he was "okay," more or less. He understood why we had to put her down and would patiently explain it to his brothers ("she's sick and going to die anyway, it's our job as her people to make sure it's not painful"). He sought Ceiba out for extra love and attention during her last days, but was also very focused on the exciting possibility of a new dog. His rapid-fire approach to grief certainly came in handy with Max, as we had less than zero time to adequately prepare the boys for what was happening. They'd known he'd been... Read more → 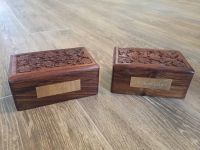 I had a dream last night that Max showed up back at the house. The healthy, heavier Max of days gone by, just back wandering around like oh hey what did I miss? Part of my brain attempted to argue with the dream logic (or lack thereof), flashing back to memories of his actual passing and removal from the house, arguing with a random sea of strangers who also just happened to be there (because okay) that no, he died, he definitely absolutely died...yet eventually another part of my brain overruled my objections and decided that no, this is real! Let's accept it! It was all a big mistake! Let's be happy! Max is back Max is back Max is baaaaack! And then I woke up, and remembered that the vet called yesterday to tell me that Maximillian's ashes had been delivered. I picked Ceiba's up last week after Beau's first vet visit. Which: Okay, that's a lot to take in and unpack right there. I held it together pretty well until I got home and proceeded to full-on ugly cry over the tiny little box with the velvet bag inside and the labeled plastic bag inside of that and... Read more →

Posted at 10:48 AM in Ceiba, Maximillian Thunderdome | Permalink | Comments (36) 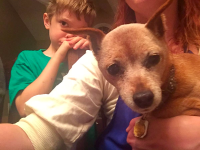 Slightly morbid but necessary update: We've arranged for a vet to come to our home on Wednesday morning to help Ceiba pass while the boys are at school. They understand Wednesday is our Goodbye Day and that she won't be here when they get home. In the meantime, we're all working on a Memory Box, full of pictures and drawings and even a teeny tiny Ceiba made out of Lego. We'll include things like her collar and favorite toys when the time comes as well. I have opted to get her ashes back and plan to scatter them on our new work-in-progress garden. No one else in the house wants anything to do with any sort of remains, but I have a mild panic attack at the thought of her just leaving our house and it being like...welp, that's that! So I'm doing that part solely for myself. We've been pretty straightforward with the boys about everything -- no sugarcoating so far, but lots of assurances that being sad is totally normal and it's okay to cry or feel other things, like anger or fear. I'm really proud of how they're handling things and working through it each in their... Read more →

So Long & Thanks For All the Waffles 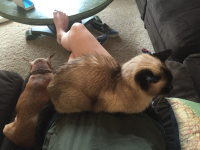 Thank you, Internet, for the huge loving wave of kind thoughts and condolences. I really had no idea so many people had so much genuine affection for my little dog, and it was an unexpected bright spot in an otherwise total shithole of a day. So Ceiba has cancer. It is all very bad news. The cancer diagnosis was...not a huge surprise to us. Jason basically called it as soon as we got her first negative UTI result. I needed to cycle through a few more of the treatable possibilities first, but over the past couple weeks -- thanks to the blood and drastic weight loss -- I came to the same conclusion. I was possibly holding out hope that it was bladder stones, but deep down I was fully expecting the worst. Making it official and shifting our worry into our reality, though, is rough. Really awful and rough. Her prognosis is not good. There is no realistic treatment option at this point. We won't put her through chemo and surgery would be incredibly invasive (as the tumor is inside her bladder) and dangerous for a dog her age. There's a drug treatment that MIGHT slow the tumor growth... Read more →

And now we know 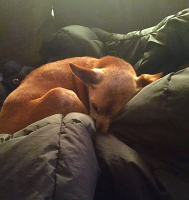 When I picked Ceiba up from the pound post-Grand Adventure*, one of the workers who'd cared for her told me there'd been some blood in her urine that morning. "Uh oh," I said, before blabbering on to her about our ongoing saga with accidents, the multiple urine and blood tests that all came back negative for multiple conditions, the re-crate-training that seemed to help until it didn't, and the ultimately unsatisfactory diagnosis of a old-age-related behavioral problem, likely linked to dementia. But obviously, bloody pee is some next level shit (SEE WHAT I DID THERE), and means that we've missed something. I brought her home and watched her carefully (frankly, beyond obsessively) and everything actually seemed okay for the next couple days. No blood that I could observe, so I wondered if maybe it'd been a fluke from the stress of the whole ordeal. Then Monday morning I came home from dropping Ike off and was immediately greeted by a red-tinged puddle right by the front door. We were back at the vet with another urine sample within a couple hours. Once again, no sign of an infection. Bloodwork ruled out all the most likely culprits. But there was definitely... Read more →

Who's a good dog who learned her lesson? Who? [IMAGE NOT FOUND] Oh my God, y'all, you guys, people. This dog! This poor old senile blind-ish deaf-ish stupid damn dog. She'd barely been home from her Big Adventure for a few hours before she made another break for it. I let her outside (collar and tag and license and fully registered microchip all intact), then had a mild panic attack a few minutes later when she didn't return to the door quickly enough. (I spent most of that day with a touch of low-level dog-related OCD, where the sight of an empty bed or crate would immediately compel me to run around the house to confirm that yes, okay, she still was inside the house.) But this time the worry was justified. I looked out the family room window and SURE ENOUGH, there was my dog, once again on the wrong side of the fence. At least this time she had enough sense to seem worried about it, as she was mostly just running around in circles like OH SHIT NOT AGAIN WHAT DO I DO? I ran outside and swooped her up, then took another look at the fence... Read more →