Well. Hi! It's been awhile. ENTIRE DAYS, since I last rapped at ya. Probably an unprecedented number of days. (Unless you count all the writing I've done here and here and here and even some writing that will hopefully actually appear printed on an actual piece of for-real paper and no, I'm not just talking about when my mom prints out blog entries that she likes.) (No, not a book. I would very much like to write a book, but I seem to lack someone stepping in and saying "WRITE A BOOK ABOUT THIS SPECIFIC TOPIC AND HERE, HAVE SOME MONEY." That used to happen, didn't it? But not anymore, I don't think. Anyway, point is, time, publisher interest, attention span. I am zero for three.) I had perfectly good reasons for not updating, but sadly none of them were particularly interesting. At least not in a AND THEN MY OVEN CAUGHT ON FIRE sort of interesting. I was...busy. Ish. Ezra had his three-year check-up and he's oviously fine and great and fine. Only thing of note is that he moved out of the 10th percentile for weight into the 25th, and it took all damn morning to learn that... Read more → 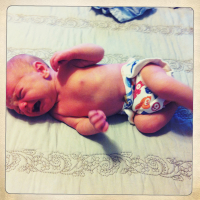 Not going to lie: Running out of steam here. I committed more words about cloth diapering last week than any sane human being ever should. (I even went off on a whole big woolie-pant tangent at AlphaMom. SOMEBODY STOP ME.) I kind of just want to go lie down and not listen to myself for awhile. But okay. Ike is now three-and-a-half-months old. This is what my diapering stash/area/fortress of crazy looks like... ACTUAL DIAPERS: Two dozen newborn-sized prefolds Nine one-size fitteds Six one-size FuzziBunz Two one-size Charlie Bananas (hand-me-downs from Ezra) One GroBaby all-in-one (same deal) One BabyKicks hemp fitted (one of Temerity Jane's cast-offs, similarly not adored here, but used) COVERS: Two Thirsties Duo Wraps, size one Two PUL covers from Fluffy's Diapers, size small Three upcycled wool covers from Ocean Babies, size small Four fleece covers from Pumpkin Pants, size small STILL NOT YET IN FIRST-STRING USE: 12 refurbished one-size bumGenius 15 FuzziBunz, size medium Yes. This is (wait for it) a shitload of diapers. This is way, way more than I need. Way more than anybody needs, for just one measly baby. This is, however, NOT some damning proof that everything sucks and is wrong and... Read more →

ZOMG, YOU GUYS. So immediately after finishing my epic manifesto (or at least PART ONE of it) (and I don't think "finishing" is correct, because it was more like I ran out of time and simply had to STOP TALKING SO MUCH and hit the Publish button), I dashed out to meet Noah at the school bus. While I was waiting, I pulled my blog up on my phone, just to double-check that everything had published okay...and to start spotting the inevitable typos that always suddenly become SUPER obvious the second after I've convinced myself that I've proofread enough. And that's when it fully hit me JUST HOW MANY WORDS I'd committed to the topic of cloth diapers. By the time I was done scrolling through all those many, many paragraphs to the comments, MY THUMB HAD A FUCKING CRAMP. Then I did this embarrassingly audible snarf-laff at myself, because FUCK YOU, BREVITY, and another mother gave me a look and asked what was so funny. I opened my mouth, ready to explain that "oh hi I just wrote a Great American Novel's worth of text about my infant's diapers on the Internet for no real reason," but then thought... Read more →

Hey, Baby Ike. So. This is awkward, but apparently the Internet is very, very interested in hearing about your diapers. Not in a creepy way! I don't think. Everybody just keeps asking about the cloth diapers and what we think of the cloth diapers and would we recommend the cloth diapers or are we just pointlessly martyring ourselves over the cloth diapers and so forth and so on and etc. The thing is, there are about 500,340,201,430 (at last count) websites out there that discuss cloth diapers. Probably a good half of those sites specifically cover cloth diapering a newborn. I know, because I read just about every single flipping one while I was pregnant with Ike. Noah wore disposables, and honestly, it never even occurred to me that cloth was a viable, non-crazy-person option. I switched Ezra over to cloth diapers when he was around four or five-ish months old. I was sick of diaper rash and poop blowouts, and we were making all these other efforts around our home to be more (GAG) "green" and generate less waste and trash, so disposable diapers kinda seemed like something we should eliminate (ZING). That, plus our inability to EVER remember... Read more →