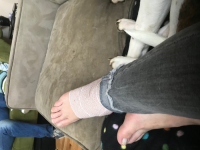 Happy 2019! Do we have a new president yet? Well, all that garbage aside, lots of things have actually happened! I got a foster dog! I turned 41! I cut my hair off! I took my kids on a boat! I went to a New Year's Eve party and talked to people! Then I lost my phone and found it the next day out on my street! I slammed my ankle (yes, that ankle, it's always the same damn ankle) in a car door! The biggest development (besides my swollen-ass ankle) is definitely Jake the Foster Dog, better known (by me and only me) as Goobs. He was found as a stray in Georgia and then spent an excruciating SEVENTEEN MONTHS being overlooked in a shelter. This was him a week and a half ago, getting loaded up for transport. And this is him now! He's a sweetheart. He gets along very, very well with kids, dogs, cats and couches. We think he's about 10, but he's really perked up as he's settled in and can get downright playful and butt-wiggly. Vet said he's in excellent health. He's starting treatment for heartworms (which were caught early) in a couple weeks... Read more →