Patience is an ocean

On the first day of our vacation, I took Noah to the beach. Just us. Jason was putting out one last work fire. Ezra was...well, he was eating, having already figured out that 1) all the food here was delicious, and 2) he could get into the kitchen via an always-open back door, and that there was ALWAYS someone in there cooking something, and they were ALWAYS happy to give him a taste, like an over-eager puppy begging for scraps. So Noah and I went to the beach. I might as well have taken him to the dentist, because he did not want to go to the beach, because of the ocean. He did not want to go near the ocean. He did not want to look at the ocean or hear the ocean. NO OCEAN. He stood as far back on the sand as he possibly could, practically climbing up a wall of rocks in his bare feet, adamant about the NO OCEAN part. The ocean in Jamaica is not like the ocean here, which knocked Noah over two summers ago and he has refused to go near since. (He holds a mean grudge, I've learned.) It's calm, shallow.... Read more → 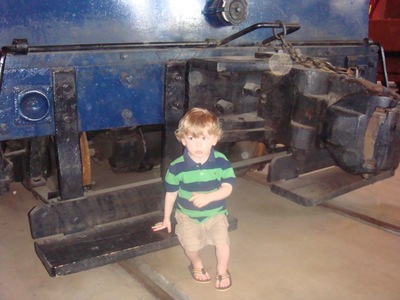 We arrived at the Thomas & Friends Presents: Day Out With Thomas: Great Discovery Tour 2008, Brought to You By LEGO/DUPLO, the Choice for Exxxtreme Plastic Interlocking Block Building, just as the life-sized Thomas engine pulled into the station. Noah managed to catch about a half-second glimpse and promptly lost his mind. "THOMAS!" he screamed. "THOMAS! THOMAS!" I thought for a second he was about to plum pass out from the excitement. Even the will-call ticketing folk, whom I imagine are sick to death of Thomas and Percy and Sir Topham Fucking Hatt after the 17th consecutive weekend of dealing with this nonsense, smiled at Noah's Beatlemania-level enthusiasm. Jason and I smiled like big old dweebs, because WE RULE. MAXIMUM MAGICAL SPECIALNESS ACHIEVED! GREATEST. PARENTS. EVER. By the time we got closer to Thomas, Noah was speaking in tongues. Thomas! from amalah on Vimeo. And. That's probably when we should have turned around and gone home. Note to the Greatest. Parents. Ever: when your child says no, he does not want to ride on the train, don't fucking make him ride on the train. Oh my God. Then again, I'd ordered the tickets weeks ago for $18 each. Plus $3.50... Read more →

This week's Insurmountable Odds Standing Between Amy & Gymboree: 1) No car. Still. We've had zero time to take it in for repairs, so just to let the poor useless thing know we haven't abandoned it entirely, I like to go outside and kick it occasionally. 2) No stroller. In Jason's car, despite the three separate reminders this morning to put it in my car, plus the way I chanted "stroller stroller stroller" as he walked out the door. He rolled his eyes and got all kinds of testy with me, because OKAY. GOD. And then he walked outside and was promptly distracted by "some kind of crazy pothole-filling machine" and forgot to move the stroller. 3) No house key. Realtor has it. Jason forgot to get a copy made; I forgot to steal his off his keychain. 4) No morning nap. Self-explanatory, although I do wish I was technically proficient enough to upload an MP3 of Noah's EEEEEEEEEEEEEYYYYYEEEHHHHHHEEEEAAAAHHH shriek-fest, just to really give you the full multimedia experience of this one. So obviously, I called Gymboree and scheduled a makeup class, because really. I can take a hint. Right? Ha! No, I totally did not do that. I called... Read more →