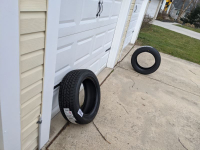 Behold, the shortest #TIREWATCH in the history of #TIREWATCHING. These appeared outside yesterday, and I was initially dismayed because I' was under the impression that the replacement tires were getting shipped directly to the mechanic, thus eliminating any possibility of them overstaying their welcome in my foyer. But Jason came home and promptly loaded them up, and then drove them over to the shop where they are getting installed today. The End! (That's it. That's the post.) The two blown-to-hell tires are NOT candidates for keeping around as emergency spares, and will NOT be coming home in the back of the minivan, where they would otherwise likely be forgotten about for a month or so before getting rolled into an inconvenient corner of the garage and/or the hallway right outside my bedroom, like a new and updated version of the Pennywise cutout prank. Truly, a bit of a missed opportunity for us. In summary and summation, I am looking forward to getting my car back, but DAMN, being normal responsible adults really kills the #content around here. Read more →

Posted at 10:22 AM in breathtaking dumbness, TIREWATCH | Permalink | Comments (7) 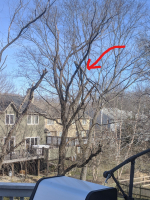 Last March, a wind storm snapped a large branch off one the willow trees in our backyard. (Well, actually many, many branches, as seen here.) But one particular branch got...stuck...on its way down. Like so: Being the responsible and capable homeowners that you know we sometimes seriously think about attempting to be, we saw two possible solutions: 1) Hire a tree company to come deal with it. 2) #BRANCHWATCH So the branch has been stuck there for since last March. When we're outside on the deck we might stare at it, discuss the physics and trajectory that got it wedged where it is, and what it might take for it to finally fall down. It'd make good firewood, we'll say for the hundredth time, if we could just get it down from there. Sometimes we just complain about it, as it's especially noticeable and ugly and dead in the spring and summer because the willows are too spindly and sparse to camouflage it. The kids throw rocks and soccer balls at it from time to time. We all poke our heads outside after every subsequent snow or rain or wind storm to see if it's finally been rattled loose. But... Read more → 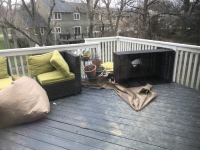 Hello! Is everyone continuing to enjoy this ass-bonkers March weather? Tomorrow it's pgoing to snow, on Sunday I walked to Starbucks in a hoodie, and on Friday all our outdoor furniture tried to make a break for it and blow off the deck. (#TIREWATCH2018 #ISEEYOU) I bundled up and battled the wind for awhile and got all the furniture and cushions back in place and securely covered, only to look outside like 20 minutes later at this: Yes, that's much better. The kids are LOVING all the canceled school days, although I predict much gnashing of teeth and rending of garments in a few weeks when they realize they're losing most of spring break to make-up days. Pro-tip: If you have to go to Target in the middle of a N'oreaster, try a ponytail! We still do not have a completed patio, and therefore no hot tub either. It's been a lot of stop-and-go trying to get work done in-between all these wind/rain/snow storms. I'm hoping they'll manage to finish up today but who knows. The whole patio-building process is a lot more complicated and labor intensive than I realized (I thought it was more like, "Here are the bricks,... Read more → 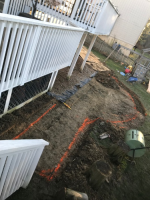 Look, it's a patio! Er...well, not quite yet. We admittedly chose the worst time of year to start an outdoor project, as the crew can't work in the rain or whatever the hell kind of INSANE WIND STORM swept in last night that canceled schools and sent everybody's trash cans dancing up the street. So right now we have a lot of dirt and rocks and pallets of pavers beautifying our yard. Also this! Which is delighting the boys to no end. Look at them, not even wearing jackets three days ago and now we're trapped in a sub-freezing bomb cyclone vortex of some kind. All very fine and normal and I am feeling really great about the climate right now!!! We're getting a patio for two three reasons. One, that area behind/under the deck gets absolutely zero sun and is basically a perpetual, unusable swamp. So trying to do anything in the backyard (be it gardening or s'mores or magical berry gathering) requires you to first wade through several inches of mud worthy of the Fire Swamp. Not pleasant, also take off your shoes take off your shoes omg children stop coming inside with those damn muddy shoes. Reason... Read more →

Time Is a Flat Tire

Ha ha, look at me. I'm funny. WHAT THE WHAT THE FRESHEST OF HELLS NO NOT AGAIN JASON PLZ I AM BEGGING YOU OMG WHAT Touché, you ridiculous bastard. (FML! Hope everybody enjoys their holidays this weekend! I am frantically emailing teachers [so many teachers, holy shit] last-minute gift cards while pretending that was my plan all along and not because I forgot and then I have to go buy food for Christmas dinner and take Beau to the groomers and the kids to see Rogue One [MOST IMPORTANT] and yes, replace a tire on the minivan because there's a slow leak and I am a grown-up who is in charge of my car, my destiny and also my motherfucking foyer.) Read more →

Posted at 10:57 AM in breathtaking dumbness, TIREWATCH | Permalink | Comments (14) 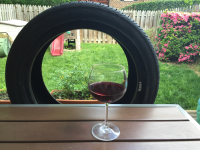 The day has come, the assholes said. To talk of many things: Of ships, and shoes, and sealing wax, And Craiglist ads, and tires. (Okay that last line might need some work. Am simple drunk-ass blogger, not poet, after all.) But YES. The day has come, little walruses. TIREWATCH 2015 is officially over. Someone bought the tire. It's gone now. (Our last moment together, before Jason came to pick it up and/or it rolled right the fuck off the picnic bench like an ungrateful bastard.) We got one hundred dollahs for the tire. Worth it? Jason thinks so. The rest of the world who had to put up with this nonsense online might say otherwise. Bye Tire. I should have named you Felicia. This has been TIREWATCH 2015: THE TIRE WATCHENING, brought to you by your friendly neighborhood asshole who really, really hope none of the neighbors saw her posing a fucking tire at a picnic table and pouring it a glass of wine at 2:30 in the afternoon while giggling like an idiot because HA HA LOOK TIRE THINKS IT'S PEOPLE. Read more → 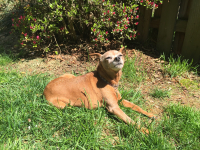 This post is sponsored by Adams™ Flea & Tick Control Products THINGS CEIBA NO LIKE: 1) MAILMAN 2) FOOD THAT IS NOT WAFFLES 3) CHILDREN WHO NO SHARE WAFFLES 4) WHEN CAT STEALS BEST SUNBEAM SPOT 5) FLEAS AND TICKS Things Max is not particularly a fan of: 1) Online meme-y catspeak that really demeans us all, if you think about it 2) Not being fed right this second 3) Or this second 4) Dog getting up in his face while he’s just trying to chill in a sunbeam 5) Fleas and ticks I remain neutral on the great sunbeam turf war but at least I’ve got them thoroughly covered on number 5, thanks to Adams™ Flea & Tick Control Products. Oh yeah. IT’S ON. While I can’t think of ANYTHING that ISN’T terrible about a flea infestation, I will say the WORST part is the re-infestation, right when you think you’ve got the situation under control. Or noticing the OTHER pet, who was just fine the first million times you checked, suddenly scratching like crazy. COME ON. We’ve been really pretty fortunate that our pets have stayed mostly pest-free, but I like to think it’s because we’re not idiots... Read more →

Only Know You Love Her When You Let Her Go 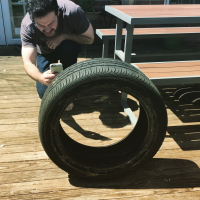 It happened! It really happened! You can now own an important piece of amalah.com history: The tire is for sale on Craigslist. Does anyone need a tire? This particular kind of tire? Is that a good price for a tire? Who knows! Who cares. Someone please come buy this stupid tire so I can finally stop doing stupid shit like this: This has been TIREWATCH 2015: THE TIREWATCHENING, brought to you by your friendly neighborhood assholes who literally filmed like seven different versions of this video with different sad songs playing in the background, ultimately proving once and for all that the tire is not even close to my biggest problem right now. IMPORTANT UPDATE, 1:49 p.m. In response to this post, Jason just sent me the following video: Funny. Very funny. You realize the entire neighborhood knows we're batshit crazy now, right? Read more →

The Spring Break That Never Ends 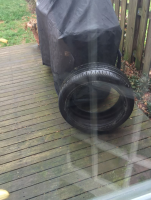 Rainy drab days around here. Starting to feel a little sorry for the tire. He seems lonely. Or perhaps I am simply jealous that the tire is at least getting some peace and quiet and isn't trying to work while this is happening six inches from its laptop and also not pictured is all the SCREEEEEEAAAAAMMMMMINGGGGG: At least they're (mostly) wearing helmets? This has been TIREWATCH: THE TIREWATCHENING, brought to you by your friendly neighborhood assholes who are starting to project their encroaching sense of ennui on the tire, while also referring to the tire as a "he," and oh my God, school needs to start up again before I have a complete break from reality and move the tire into my foyer and like, put a decorative candle and a tray for my keys on top of it him. Read more → 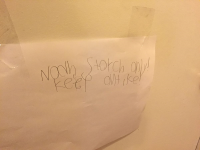 The first great crisis of Spring Break 2015 is here and happening, and has the ranks thoroughly divided. A single Lego minifigure is missing. It is apparently a VERY IMPORTANT minifigure, because its status as lost has rendered Noah's entire Hero Factory collection useless, because he cannot play Hero Factory without this minifigure. They have told me this minifigure's name 14 billion times, but I still have no idea who or what they are talking about. I think it's red? According to Noah, the minifigure was last seen in Ike's possession. Ike maintains that he put it back in Noah's room where it belongs. Again, according to Noah, this is a damned dirty lie because he's looked "everywhere" in his room and it's not there. I remain neutral, because I'm pretty sure looking "everywhere" involved little more than standing in the center of the room and sort of idly glancing around, the way he also looks "everywhere" for his shoes, which are typically three feet away and in his direct line of sight. And yet also nowhere to be found! Strange, that. After more fruitless searching (at one point they attempted to use Ike like a search dog, making him... Read more →